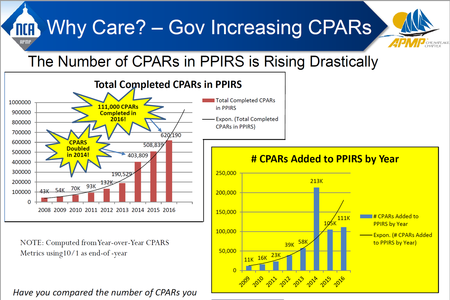 Dating back to the introduction of PPIRS in 2002, the total number of CPARs has continually risen as the Government has realized the importance of collecting and using Past Performance information to award Government contracts. If we take a closer look at the past few years, there have been a few clues that provided a pre-warning that things were moving exponentially. The following provides some of the reasons for this dramatic increase in CPARs: 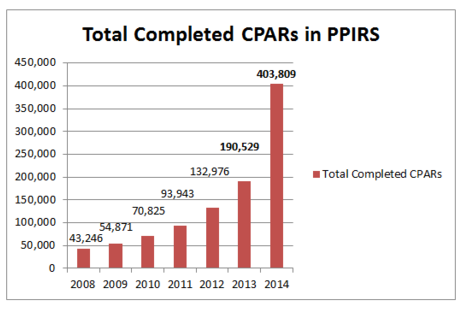 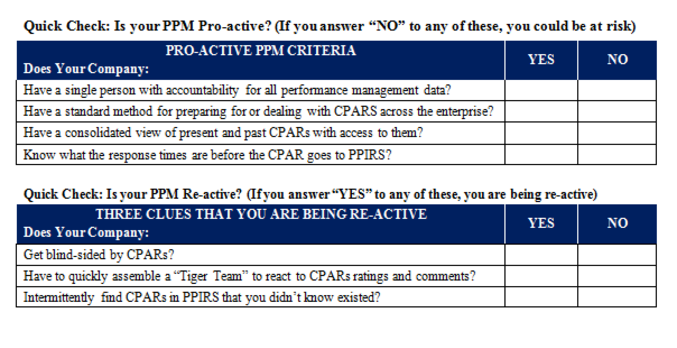 This is a significant increase in the number of CPARs available for the Government to use to award Government contracts. It is worth taking a closer look to see why and how this happened, and what this means to the contracting community.

Most companies that I have worked with use a mix of re-active and PROactive PPM methods. At first, most companies lean more towards the re-active side. Once you figure out where you stand, and understand the important and benefits of PROactive PPM you will want to prepare for what is to come in the future.

Can your company afford to lose proposal efforts for the next 3 years?

One of my favorite quotes came from someone that said the following when asked if they track their performance data in PPIRS, “I will worry about that when we lose a deal because of it.” While taken at face value, that statement seems to be a “if it’s not broke, don’t fix it” approach. But the problem is that if you lose a deal because of poor performance ratings, you will now be dealing with that data for the next 3 years!  Can you afford to potentially lose for the next 3 years? If so, continue with business as usual…if not, consider implementing a PROactive PPM program in your company. 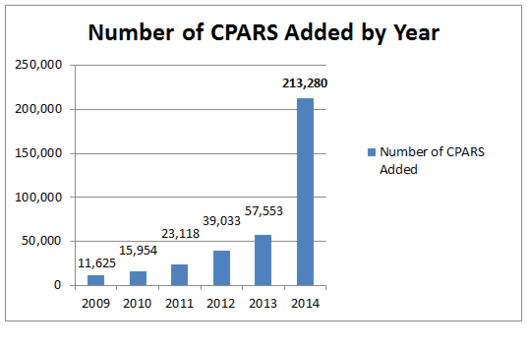 We will be adding articles to this site as time permits. The next article in the series includes the 2016 CPAR Updates & PPM Presentation:

Exhibit 1 - The Federal Government is Getting Serious about Tracking Contractor Performance. The total number of CPARS available in PPIRS more than doubled in 2014 exploding from 190k to more than 400k last year.(as of 10/31 of each year)

CPARS Doubled in 2014! Who Cares? What does this mean?

Past Performance Management (PPM) for Future Success! In this series of articles, Rob Muzzio presents an in-depth look at what contractors need to know to optimize their potential for success in the Federal Government contracting arena. Rob’s goals are to spread the word about the importance of PPM and get the industry and Government talking to share ideas to improve the efficiency and effectiveness of the collection and use of accurate and relevant contractor performance data and thereby achieve better outcomes for the Government, taxpayers, and contractors. Win-Win-Win!

Author: Rob Muzzio, a member of the 1992 U.S Olympic Team, has been supporting Federal Government proposal development through proposal writing and management consulting in the Washington DC Metro area for more than 19 years. By dedicating his career to business development for Government contractors and studying applicable Government policies, Rob has developed expertise working with Government performance ratings systems including: Contractor Performance Assessment Report (CPARs), the Past Performance Information Retrieval System (PPIRS), and Open Ratings performance reports. He has used this expertise and his Olympian work ethic to help companies win more than $14.7B in Federal Government contracts and earn the highest and most accurate performance ratings possible. He initially unveiled the basics on this subject at the 2013 Association of Proposal Management Professionals (APMP) National Capital Area Proposal Conference where it was well received by attendees.

​If you have a contract with the GSA, DoD, NASA, or any Federal agency, your chances have doubled that your performance is being monitored through the Government's Contractor Performance Assessment Report System (CPARS). In 2014, the number of Government report cards available on contractor performance more than doubled from the number available in 2013. The big question you need to ask is, “So What?”….”What does this mean to me?”

How did this happen?

Add these things up with a lot of other publicity, systems changes that include automated email reminders, and demands for action and you can see that they have made a big impact resulting in the major increase in the CPARs available.

Why do we care?

​We need to care because, this information is used to help determine whether or not Federal contractors will win Federal contracts. For example, the GSA OASIS RFP (awarded in 2014) used the CPAR ratings available in PPIRS to determine 30% (3,000 of the 10,000) possible evaluation points. By assigning a point value to each CPAR rating area for Quality, Cost, Schedule, Business, and Management then totaling the points, each contractor could determine how many points they would receive.  This is just one example of how Past Performance Information (PPI) is used, but was a huge step for the Federal Government to directly tie CPAR ratings to evaluation points. This now opens the door for other similar evaluations. While the Government tends to move very slowly, it does seem to catch up over time.

What can you do?

PROactive Versus Re-active PPM. Many companies do not know what performance data the Government has on them in PPIRS. They think they do, but because they do not review and analyze their performance data in PPIRs on a regular basis, they really do not. I have found that many companies do not track the performance data that the Government collects on them, and that there are inaccuracies and errors in their performance data that is available to the Government. As we are experiencing, the Government continues to collect and use this information more and more. This makes an ad-hoc/re-active method of performance management a highly risky approach that will cause big headaches down the road as the Government and public continues to push for the collection and use of this data. The re-active methods of the past will result in unnecessary, inaccurate, misinformed, and less than warranted CPAR ratings that can lead to contract losses down the road. Remember, the CPARs data stays in PPIRS for 3 years. Therefore, ignoring it now will bring much pain in the future. The good news is that moving to a PROactive PPM method is easily remedied.